Washington: A part of America Returning to its True Values
We have again been asked to choose the tired Republican corporate philosophy that has proven itself as massively flawed, ineffective and seriously partial to corporate welfare – a philosophy that has consistently ignored the needs of workers, families, the elderly, the poor and middle class.

Assaulted by misleading and inflammatory ads that have been proven false, we've been asked to choose a governor.  Those Rossi ads assume that our best decision is the one made while we are not calm and composed, but when misled, angry, and stampeded.

We are being asked to ignore our worries about our jobs, wallets, health care, mortgages and other real concerns. Instead we should be fired up by wildly false Rossi campaign messages having nothing to do with what keeps us awake at night.

Do you think all that false nonsense about misplaced sex offenders, tribal bribes and the need to "peel off" children's services in order to protect children from their own government is real?

Does any of that have anything to do with how Rossi would govern?

In reality Rossi's state campaign strategy underlines the decline and possible demise of the Republican Party as a positive force for good everywhere in this country.

In this and most states all the Republican Party has is panicked desperation and poorly-thought out strategies.

An Obama administration has already committed itself to change. Voters are endorsing that commitment in large numbers. The Democratic Party is able to attract votes during this election because Republicans have thrown virtue, wisdom, common sense and civic duty into the gutter. The McCain campaign demonstrates this every day.

Obama and the Democrats are committed to lifting our national well-being out of the gutter.

Christine Gregoire has demonstrated and proven that civic well-being is her highest priority for each of us.

Rossi is of that other ilk. His ads proclaim his poor campaign priorities and prove how shallow a candidate he really is.

There's an incoming federal administration committed to massive civic change and restoration of America's real core values. Do you want to be a part of America returning to its true values?

Or do you want to drive forward while looking through the rear-view mirror in a state with a shallow, tale-telling, stampeding wrong-road Red State Governor?

A governor like all those elected officials other states are throwing out of office wholesale?
at October 28, 2008 No comments: 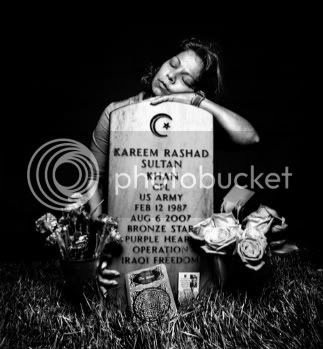 The photo Colin Powell referenced in his endorsement of Barack Obama.  The photo of mother at her son's gravesite, a young man, 20 years old, soldier from Fort Lewis, killed in Iraq, awarded Bronze Star and Purple Heart.  Emblem on his gravesite is not the Christian cross, the Jewish Star of David, but the Muslim Crescent and Star.  Kareem Rashad Sultan Khan, Cpl., U.S. Army, Operation Iraqi Freedom, was an American who was 14 at the time of 911.  He waited until he was of age to enlist in military to serve his country (United States of America) and he gave his life for his country...the United States of America.
(edited to add Colin Powell was referencing a soldier from Fort Lewis - Tacoma, WA)

Khan served with the 1st Battalion, 23rd Infantry Regiment, a unit of the 3rd Stryker Brigade, 2nd Infantry Division. He and three others were killed Aug. 6, 2007, when bombs exploded in a housing they were clearing in Baqouba, Iraq. Just hours earlier, the four were on a humanitarian mission, ensuring food and relief supplies were delivered to women and children in the city northeast of Baghdad. He was 20.

I feel strongly about this particular point because of a picture I saw in a magazine.  It was a photo essay about troops who are serving in Iraq and Afghanistan.  And one picture at the tail end of this photo essay was of a mother in Arlington Cemetery, and she had her head on the headstone of her son's grave.  And as the picture focused in, you could see the writing on the headstone.  And it gave his awards--Purple Heart, Bronze Star--showed that he died in Iraq, gave his date of birth, date of death.  He was 20 years old. And then, at the very top of the headstone, it didn't have a Christian cross, it didn't have the Star of David, it had crescent and a star of the Islamic faith.  And his name was Kareem Rashad Sultan Khan, and he was an American. He was born in New Jersey.  He was 14 years old at the time of 9/11, and he waited until he can go serve his country, and he gave his life.  Now, we have got to stop polarizing ourself in this way.  And John McCain is as nondiscriminatory as anyone I know.  But I'm troubled about the fact that, within the party, we have these kinds of expressions.

There is much to be mined from Colin Powell's speech that might resonate more strongly with others.  Colin Powell, with this reference, eloquenty elevated a truth and reality of the constancy of our country's relationship to the Iraq war.  I wanted to take a moment to share in elegance that truth, that reality, amidst all the background noise of the Presidential campaign.

It is not useful for me to editorialize or restate using my lesser words that which Colin Powell has brought into perspective with his own words.  I hope, readers, you will take time to listen to Colin Powell and hear the words for yourselves.

Code Pink confronts Sarah Palin in Indiana and gets thrown out. But then ....

watch it to the end and see who leaves with them.

If those leaving were "undecideds" then the Palin-McCain message didn't connect.

But if those were the base Palin was trying to shore up, then things just got worse for Republicans in Indiana.