Who are these Kindergarten Konservatives? 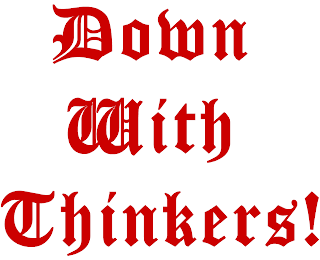 We are not citizens of a nation founded by Konservative Intellectuals whose generational grandchildren prance and posture on our national stage nowadays.

The wrong side of the American Revolution.

Approximately one third of the colonial population supported the English King George the Third. These Konservatives wanted no disruption. Afraid or trying to hang on to what they felt England had granted them, they did not want national independence. These Kindergarten Konservatives were not our original patriots.

Original American Konservatives supported protection of slavery in our Constitutional Convention. They wanted to count slaves in determining which states would be "slave states" but did not desire that they be citizens with voting rights.  These Kindergarten Konservatives in no way acted as Founding Fathers, rather as enforcers of their own power and influence at the expense of all others.

Our original Konservatives opposed tariffs to protect American manufacturing. In their Kindergarten-ness they were not able to understand any need to develop our own industrial base. They wanted no changes to a system based on cheap slave labor. They were not industrialists, but cash croppers - planters whose profits required no economic equality.

Our historical Kindergarten Konservatives supported “nullification”, which said that states didn’t have to enforce federal laws they didn’t like.

Our original Kindergarten Konservatives supported repeal of the Missouri Compromise so as to allow slavery in other states where votes and political clout was more vital than common good.

The ancestors of today's Kindergarten Konservatives opposed the transcontinental railroad, primarily because railroads carried people who might want to work on their own land and who wouldn't want or need slaves in the western territories because it might encourage small farmers who owned no slaves in future non-slave states.

Which is why the Grandpas and Grandmas of today's Kindergarten Konservatives were against the Homestead Act. They didn't want more land-owners turning the American West into a collection of non-slave states.

Those old Kindergarten Konservatives opposed freedom of speech for Southern opponents of slavery. Perish the thought that southern adults and children might hear something other than the Konservative gospel.

… which led to a  Kindergarten Konservative support of destruction of the union rather than allow any restriction of slavery.

Konservatives were opposed the earliest civil rights legislation to enforce the 14th and 15th amendments. They obstructed, intimidated and harassed newly freed slaves who attempted to exercise their Federal civil rights, including the right to vote … and considered themselves god-fearing, civic-minded moral patriots.

Konservatives were against preserving the union. Back then they wanted secession and they got it.

… supported the legal theory of “separate but equal”, a sham that led to the establishment of “Jim Crow” in the south.

… opposed the right to vote for women.

These are the real Moochers among us

These are the Kindergarten worshipers of that false American Exceptionalism that has cause more global and national grief than any noble achievement in the past 60 years.

These are the believers that uncompromising anger is civic wisdom, that blind and unblinking opposition is always better than compromise.

Look where it got them.

Look where it didn't get us.

What are these Kindergarten Konservatives?
at October 09, 2018 No comments:

On Networks and Reporters Desperate for an angle

Pike Boomdropper came by tonight to invite me to a public meeting. Said the the movers and the shakers in the neighborhood have decided that a body might not be a patriot if they're not wearin a little lapel on their bib overalls when they go into the tavern to talk real man talk.

Said his wife was setting up a special meeting of the Ladies' Home Culture Club to draw up a petition for the village of Elk Snout to pass a resolution declaring Obama an Arnold Benedict to our country cause he aint got no flyin flutterin flag badge of courage on his suit lapel.

Rumor has it that Obama also ain't willing to hold his hand on his stomach when he says the pledge. Don't recall hearing that Obama refused to say the pledge - which ought to be the better test than where he puts his hands. Heck, when I was in high school I knowed a kid put his hand on his girl friend's chest every time the pledge was being said. He thought it was funny.

Course that was before desperate networks with desperate needs decided that even the most trivial of topics might earn a buck.

Can you imagine all the cheeks-puffed, red-face pundit/patriots who've found more than one way to betray the public seating and groaning about whether or not a lapel makes a fellow patriotic?

I do know that the Republican Party is full of patriots who advocated and voted for war and never served back when they could.

I do know that some of the biggest chest-pounders for war based on flag-wavin have themselves been unwilling to put their boots where their mouths are.

I don't watch much TV news anymore. Seems like they announce nothing but trivialities - you know, the mountain groans and labors and gives birth to a mouse

Hail The Irrelevant Broadcast Patriots
at October 09, 2018 No comments:

Political Labels: How ya gonna live up to them? 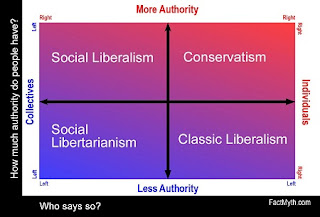 "Well, I'm really more a '-------' and I don't agree with you and don't really know what your label means but I know it must be wrong and dangerous to our Country."

"Oh yeah? Well I'm just as strong in my knowing stuff as you are and we'd all be better off if you just shut the hell up!"

"I stand with all those Americans who blah blah blah" 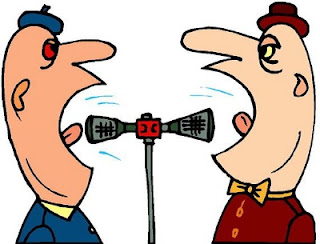 Who you callin two-dimensional?

The glory in being able to discern what we see in a three-dimensional way is that we can not only perceive automatically the differences between "near" and "far," but also perceive cubes and spheres quite differently from squares and circles. Obviously such is a consequence of our enjoyment of depth perception.

Were that such were so for mental  images, conceptualizations and imagined realities. Which brings me to our notions of left and right in political and philosophical terms. It seems that particularly in philosophical/political contexts we mostly attempt to apply two-dimensional labels to ourselves in terms of our own intellectual prowess in seeing the world as it really is. Hence, left/right stuff does not reflect intellectual depth perception, rather two-dimensional thinking lacks depth or breadth.

Two-dimensional thinking is nothing more than either/or thinking on any subject. Today the subject is political philosophy which, in this country is dominated by either/or mindsets with their pretend basis and standard of comparisons that break behavior into right or wrong choices.

Either/or uses extreme extensions to praise or vilify other folks. For example, "liberal" is implied to be firmly entrenched next to "communism" via the "socialist" tendency while "conservatism" lies dangerously next to "fascism" via the "authoritarian" route. Another way of expressing this is the label-mindedness that considers the left wing or right wing enemies of Democracy depending on how an individual is living up to his chosen label.

You will have less to live up to that does not belong to you and more freedom to be who you are.