The Seven Legion of the Highly Gullible 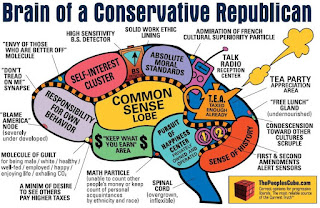 1.  Kindergarten Konservatives believe that the nation is a community of citizens that requires strong leadership, collective identity, and the will and ability to commit violence and wage war in order to keep the nation strong. War is action that creates national spirit and vitality.

2.   Culture is created by the historically triumphant superior race now living in America. Kultural ideas are what give individuals identity and those who don't look like Kindergarten Konservatives have no valid cultural contributions. Kindergarten Konservatives thus reject individualism. There is only one true way to see and believe things. Pluralism is a dysfunctional aspect of society. There is no way pluralism causes Amerika to establish a national identity and global personality.

3. It is obvious that there can be more than one political party but each party must have their version of the one true political view. In fact, a single-party state would not be a bad idea.

4. Openness and opposition to konservatism is harmful to America. Kindergarten Konservatives reject and resist the autonomy of cultural or ethnic groups who are not considered a legitimate part our nation and who refuse to assimilate or are unable to be assimilated. Attempts to create such autonomy are an affront and threat to the nation.

5.   Kindergarten Konservatives believe Amerika will be made greater the more corporations and big businesses are left alone.  The political system must include as a basic tenet a business right to consider any product or service as a marketable commodity from which capitalism ordains a right to extort a profit.

6.   Kindergarten Konservatives accuse liberals of creating anarchy through the support of democracy. Economic classes are not capable of properly running a nation. A merit-based aristocracy of wealthy businessmen must preside so as to regiment a nation's forces of production and secure Amerika's independence.

7.   Kindergarten Konservatives believe in extreme patriotism in the form of aggressive foreign policy. KKs advocate the use of threats or actual force against other countries in order to safeguard what is perceived as our country's national interests. We without shame proclaim Amerika to be the greatest country in the world and superior to all others.