These ain't no Harlem Globetrotters ... hell they ain't even the Pomona Polecats!! 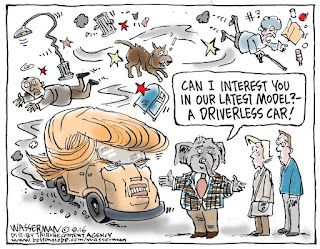 Trump and his all stars: Flynn, Bannon, Conway, DeVos ...
and now Sessions. Sitting in last place ... awe come on!!!

My Congresswoman from the 5th Congressional District, Cathy McMorris Rogers, needs to be sent to the minors. She plays ball for a self-styled Washington all-star team that seems to have no understanding of the rules and philosophy of the civic game of governance.

These particular all-stars are a collection of self-labeled  konservatives who still struggle with stick shifts and complicated words containing more than five letters.

These guys are hoping we won't have noticed just how "all-star" they are now 6 weeks into their watch. They seem to want the country to stagger forward handicapped by a flat tire at the highest level of our leadership vehicle.

We are getting no correct-direction signals from any of these leaders. They have no skill and are not up to the task of leading, let alone even managing difficulties. Despite the lop-sided political advantage of our most recent national election and the temerity and caution of the opposition party, these supposedly wise Republican leaders and strategists are demonstrating an incredible lack of skill at managing the affairs of state.

If there is such as thing as a "normal situation" in this country I could say that "normally" when one party emerges victorious in an election, those who voted for the other party can take comfort in the general high quality, integrity and bi-partisan value of governing wisdom of those who did win.

These guys make it look like this country elected the Washington Generals instead of the Harlem Globetrotters. They can't dribble, can't shoot and certainly can't play team-oriented ball.

They're constantly out of bounds, palming the ball, committing foolish and egregious personal fouls and falling further and further behind on the scoreboard.

If you look down their bench, you don't see anyone riding the pines capable of substituting for the fumblers on the floor.

You see flashes in the pan for whom the team's financial backers have big plans and lots of money but also a limited self-serving priority of filling more bleachers rather than championship rings.

... none of them show skill, wisdom or even a concern that the team remain viable, competitive and effective.

We're not witnessing the creation of any kind of winning tradition here in the spirit of the Cavaliers,  Cubs, or Patriots.

We're looking at having to endure years of the 1960's Mets when Casey Stengal asked, "Can't anyone here play this game?"